Ascot Hats for MY FAIR LADY at PlayMakers Repertory Company

From the moment the PlayMakers Repertory Company season was announced, i knew that i'd have to come up with a whole collection of Ascot hats for My Fair Lady, but i didn't begin to strategize a plan for it until design renderings were turned in and i saw the show's aesthetic and color palette.

Our designer, Andrea Hood, was interested in blurring the lines between the historical Ascot fashions of the 1900s/1910s and 21st century millinery designs by artists like Philip Treacy. Her color palette for the Ascot scene was an Easter basket of bright pastels, and she had an interest in spiral straw as a medium for these hat shapes.

I decided to start with some stitched strip hatbodies from Sun Yorkos, which came in a good range of colors for our designs, and i assembled some trim collections to begin our collaboration. 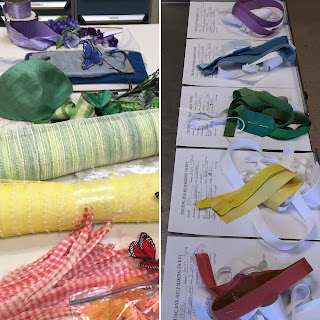 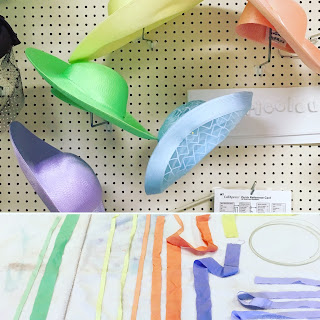 Top: the hatbodies on stands in my studio, some crowns already separated from brims
Bottom: millinery grosgrains and wire dyed to match

So, what you're seeing here is that in the Ascot scene, every woman in the ensemble has a signature color for her gown, hat, and parasol. While the drapers were working on the gowns for these characters, my task was to make the matching hats. Because there were seven hats in different styles for this scene, i'll walk you through how one of them went together. The others were all variations on this same theme in terms of the production process. 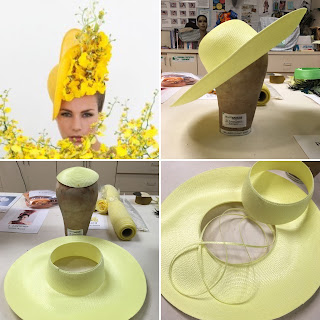 Top left is the research image provided by the designer as inspiration for the yellow hat
Top right is the hatbody before i began my work.
Bottom left shows the body with the tip removed. This will become the base support.
Bottom right shows the remainder of the sideband removed, and shows how the braid can unspiral. 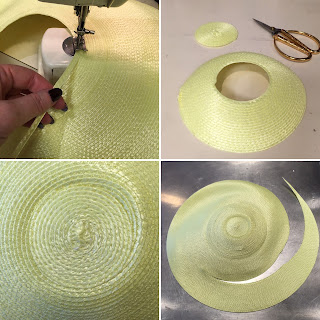 Top left is a detail shot of me restitching the braid into a spiral, in order to create that dish shape on the side of the head you see in the inspiration image.
Top right shows the button in the center of the base support removed.
Bottom left, i've stitched that button onto my respiraled dish shape.
Bottom right, i've cut into the dish so that i can basically take a curving dart in the dish to give it that little fillip at the base of the profile. 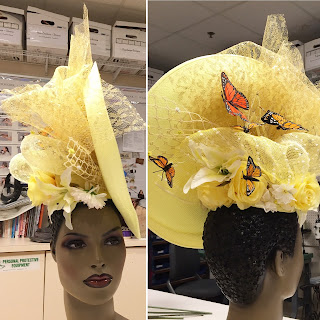 Here's the finished yellow hat from a couple views. The dish rises up from the support disk, on top of which is piled all the flowers/veiling/butterflies.
(Sadly, the butterflies got cut during tech.) 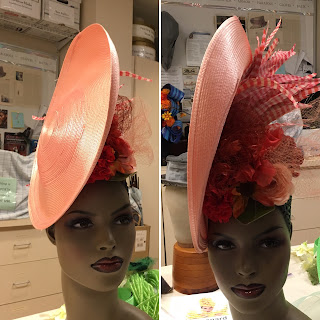 Here's peach version of a similar hat, with the plate position reversed. This shows the upkick of the plate which that curved dart produces a bit clearer. Also: stripey feathers! 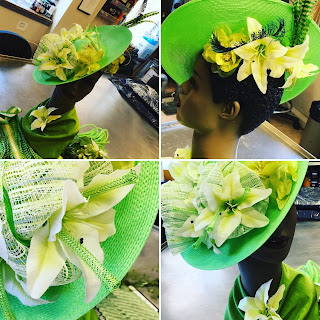 The green hat was a bit simpler, in that the brim was removed from the crown and reset at a sharp angle, then trimmed out. This is another one that changed a lot during tech in therms of its trim. In the final iteration, all the lilies were replaced with hydrangeas. 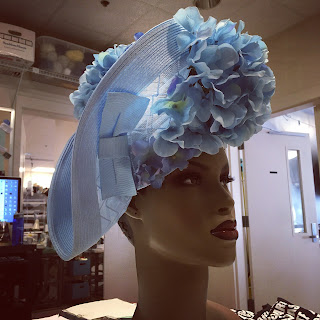 Love the horsehair insertion in the midst of this brim! This one features a kind of tricornesque shape. 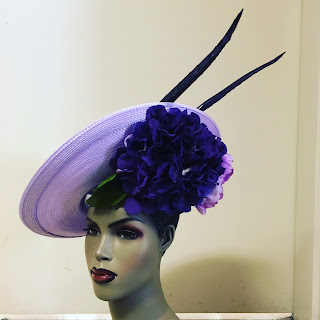 Eliza's hat, in all its sophisticated simplicity.
Those are silk "pheasant feathers" dyed purple. They don't break when they get crushed backstage! 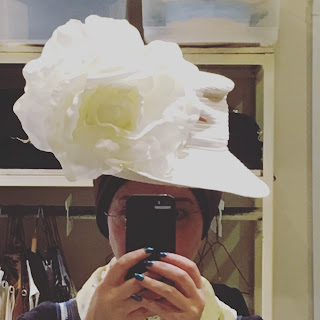 This is for Mrs. Higgins, who has limited patience for frivolity in millinery. The base here is spiraled from satin bias tape. 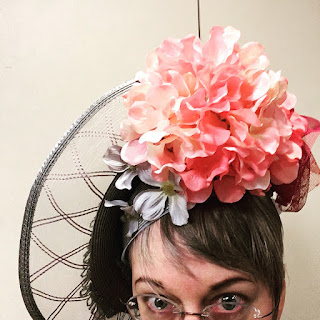 Another great horsehair-insertion brim! This one for Mrs. Eynsford-Hill i think? 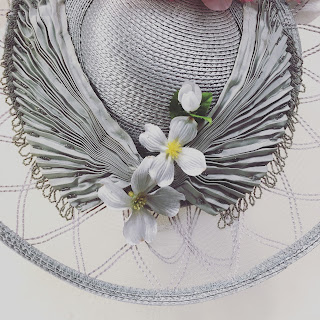 For this hat, i was pleased to be able to use this set of antique "wings" made from pleated taffeta fringed in seed beads, which i've had in stock for years waiting for a sophisticated grey hat. Finally!

So, that's a peek at JUST the hats which were made for Ascot. There were many, many other hats in this show, as well as a whole brace of--my favorite--parasols! 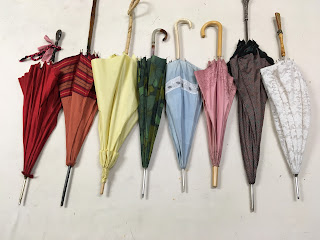