BOOK REVIEW: How to Read a Dress by Lydia Edwards 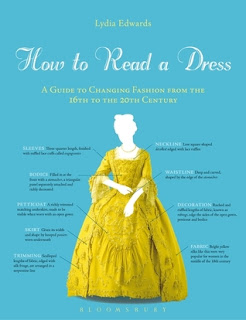 How excited was I to receive a review copy of Lydia Edwards’ new book, How to Read a Dress: A Guide to Changing Fashion from the 16th to the 20th Century!

If, like me, you are the sort of person who loves analyzing Western fashion within the context of history and, say, trying to guess the time in which a given portrait was painted based on the dress of the woman depicted, you will want to pick up a copy of this book, stat. It’s an excellent guide to the specifics of women’s fashion in terms of how shapes and details changed and evolved over time.

You might consider this a manual for training your eye to evaluate a garment or work of art depicting European (and later, American/Australian) women, and estimate its date of origin. Edwards uses primarily surviving garments in the collections of museums worldwide, and diagrams each element of the “look” which serves as a clue to its era. Incorporating examples from institutions such as the Los Angeles County Museum of Art (USA), the McCord in Montreal (Canada), and Australia’s Powerhouse Museum, so it winds up being a broad survey of the British-origin fashion diaspora.

Edwards begins her survey in 1550, citing the relative lack of surviving garments from prior decades/centuries, and extends the range up to 1970. It’s gratifying to see a fashion history text moving beyond the 1950s and the New Look, which is where most prior resources in the area tend to cut off (for presumably chronological reasons in terms of when they were published). NGL, i’m seriously looking forward to the point at which someone puts out a book that looks at the entire 20th century as a whole, fashion-wise, and considers things like the resurgence of 1940s-inspired shouldered shapes in the 1980s, or the way in which 1970s knit maxidresses reimagined 1930s bias gown silhouettes…but i’m digressing bigtime.

Ultimately, this is an excellent book for scholars of fashion history, costume designers and makers, and really anyone looking to improve their ability to determine the period of a given dress. There are several garments for each time period to illustrate differences/similarities, and each chapter’s introductory text features other reference images (fashion plates, paintings/engravings, photography once that’s been invented, etc.). Edwards’ explanations are clear and well-articulated, and were i teaching an introductory course in fashion history, i would consider adopting this as a supplementary text.

A caveat: the book restricts the scope to only the dress of women. Nothing about menswear, very little about accessories like shoes/hats beyond insofar as they related to the primary garment/gown/etc. If that’s what you’re looking for information about, look elsewhere.

Me, i’m adding this to my library at work, for our graduate students to consult when picking out period pattern projects. An excellent resource, beautifully produced in full color.