It's about time for a tutorial, so how about an easy soft structure felt hat from the 1940s? 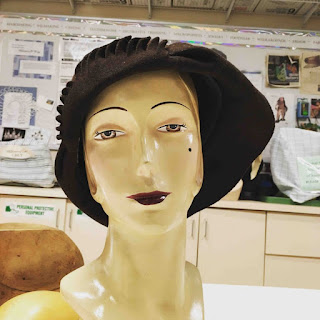 If you follow me on Instagram, you may recall this fantastic vintage hat from our stock. Zelda wears it well, no?

The original is made from a 100% wool hatbody, and was sewn entirely by hand. There is no maker's mark or label inside, and it appears to have been a DIY project, perhaps from a ladies' magazine tutorial in the first place. 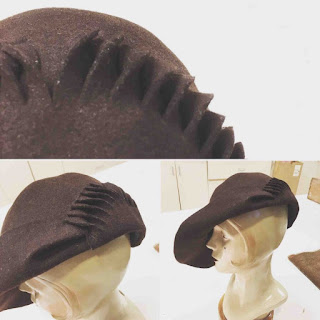 Look at that great detail of the fan shape!

I decided i wanted my own version of this hat, so i spent some time analyzing its construction and figured out how to make my own. Follow these steps and you can, too! 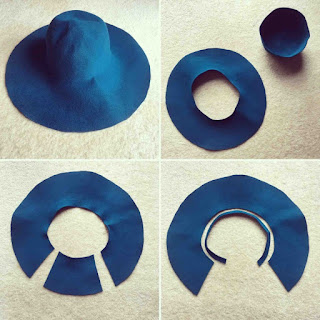 Top left: For mine, i started with a vintage fur felt capeline i had been saving for a project just like this one. You can do it with any felt cartwheel you like, though. A reader over on this blog's Facebook page made the excellent point that you could do this project with one of those floppy felt hats you see popping up these days at stores like Target for $10 or $15, which is a great suggestion for those without access to millinery suppliers, or time to mail-order them. Affordable, too, and it is frankly probably what the original artist did when making the one i've copied!

Top right: Step one is to cut the crown away from the brim, leaving the brim as a complete donut.

Bottom left: Cut a segment out of the brim as shown, at just under a quarter of the shape. It's hard to give any exact measurements on these because the shape of hatbodies varies, so i'd advise "eyeballing" it based on these images. Henceforth i'll call this little segment the fan flange, because that's what it becomes, and the other piece we'll call the brim arc.

Bottom right: Trim away a fat 5/8" from the brim arc, but NOT from the fan flange. Henceforth i'll call this strip the band. 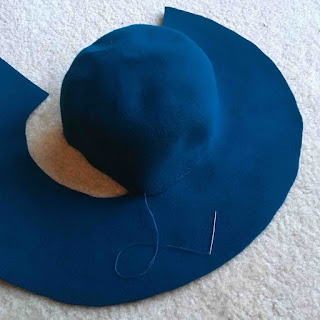 Stitch the brim arc into the crown with about a 1/2" overlap. Don't worry about your stitches being visible as long as they are straight and located about 1/4" in from the crown edge, because the band will cover this section. 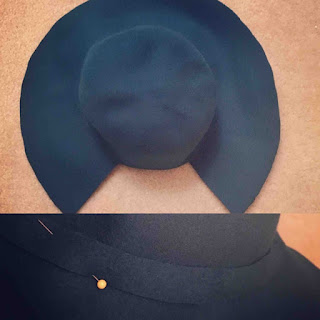 The top shows you what it should look like when the brim arc is fully sewn to the crown. You may need to trim some more of that piece down to get the right size gap at the back, because that open section should be just a bit narrower than the measurement of the fan flange.

The bottom detail shows the band pinned in place over that seam. I tacked the band down on either side at the rear, and once at center front. 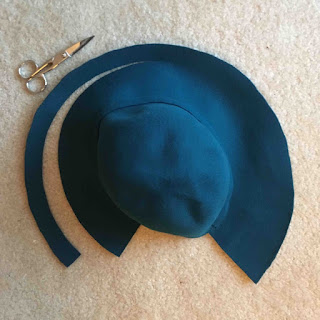 Here you see the next step, trimming the width of the brim down. Hat bodies are often irregular on the edge, so this not only brings the brim arc down to the desired width but also cleans that edge neatly. Mine is cut down to 4" here. 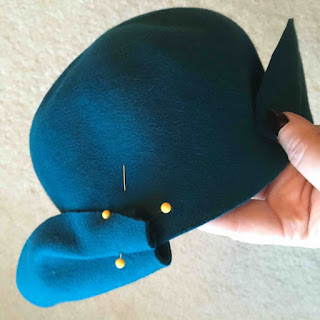 Above is a detail shot illustrating how to take a tuck in each side of the brim arc. I've pinned mine in place with quilt pins and at this stage, i adjusted those pleats in the mirror a few times til i got a good shape that I liked. Then i tacked each side down securely. 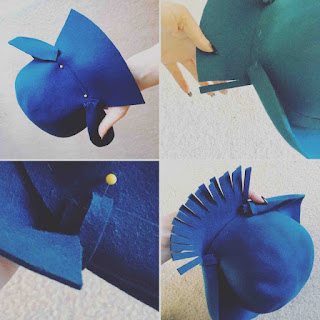 Top right: Pin the fan flange to the crown, into the gap between the pleated brim bits at the center back of the hat. You can see here some of my stitches tacking down that one edge of the hat. This is another case where trim is going to cover your stitches so security and sturdiness is key, rather than fine invisible handwork.

Top right: Cut a single strip into each side of that fan flange. You'll tack this over your stitches at the two ends of the brim arc, where the pleats are secured.

Bottom left: That strip pinned into place. In this case, i did take care to make my stitches securing it neat and invisib,le.

Bottom right: Cut the rest of the fan flange into a fringe as shown. My pieces are a fat 1/4" wide. 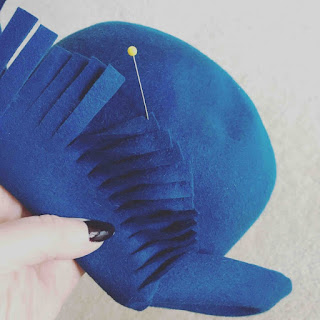 For the next step, you'll flip each strip over at the tip and tack it to the crown in a splayed fan arc. The tack should go a little bit toward center back, where this quilt pin is located, so that each strip can spring back a bit to create dimension, as you see with the strips close to the brimg there on the right.

On the original, this flange was not symmetrically arranged. I decided to do that same but you could choose to evenly split them left to right. You'll see what i mean in the next image. 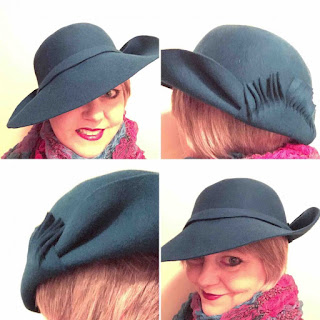 Four views of the finished hat! See how there are only seven strips flipping to the left in that top right image? There are eleven flipping to the right on mine. That fan's shape is a matter of preference.

Hope you've enjoyed this tutorial, and if you make one, please share photos!