It's been a LONG time coming but i'm finally getting around to writing about the costume replica of a stillsuit from the moving Dune, which we made for display at the Museum of Science Fiction in DC!

In the first post on this topic, i talked about the costume itself (both conceptually in the world of the movie, and practically speaking), and the nature of the costume we were being asked to create. We knew that our costume would go on display in various exhibits the museum would schedule between now and their opening, and that once they opened the permanent museum, would be on display there indefinitely. We knew that the original costumes in the film had incorporated a substantial amount of latex, custom created from body-casts of the actors, and that because latex breaks down over time and disintegrates, the original costumes were in no condition for display in the museum. We'd have to come up with a means to create our replica so that it would LOOK just like the originals, but would not deteriorate.

Devising the method of the surface treatment fell to me, and so i began a series of tests with the assistance of several of our graduate and undergraduate students at UNC-Chapel Hill. I knew that, unlike the original costumes, no actual person needed to, say, run across a desert wearing the costume we would make, so we weren't limited to surface treatments which would retain stretchiness. 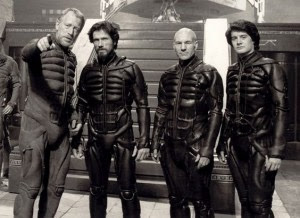 Here's a film still to remind you of what these things look like.
We were asked to make the weathered suit on the left, worn by Max von Sydow. 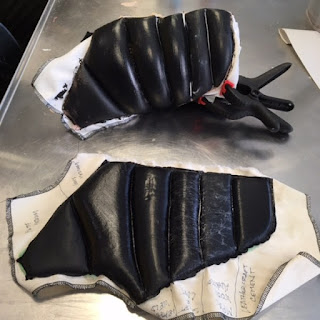 We began making padded shapes with various kinds of foam, skinned over with various weights of spandex. Then we tried out all kinds of surface coatings. Here you see several different clearcoats applied to both flat and curved pad shapes, then roughed up to various degrees of age. 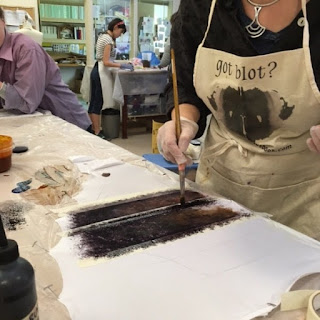 In the midst of this process. renowned Broadway fabric painter Margaret Peot came to lead our grad students in a surface design workshop, and she conducted a demonstration of the type of paint samples she would create, if this were a project being built by the shop which employs her. 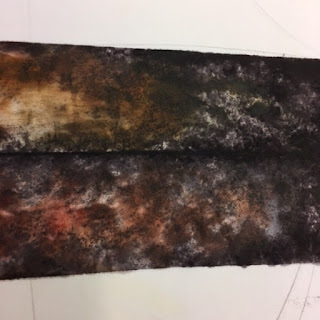 Here's a closeup of the level of depth and variegation in Margaret's sample. Of course, our suit was to be viewed by exhibit attendees standing in very close proximity to the display, whereas Margaret's costumes are often made to go onstage in a several-thousand-person-capacity theatre. This was a great teaching example for the students in terms of how a surface design needs to differ according to the distance of the gaze of the viewer; ultimately the surface we went with for the MoSF folks was not this complex in layering. 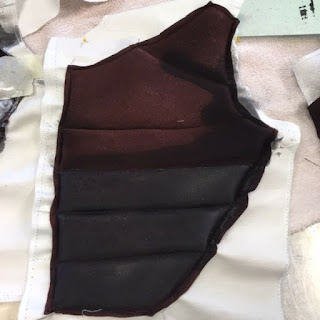 Here's a sample where i did some dye variegation on the spandex before applying any shiny coatings. 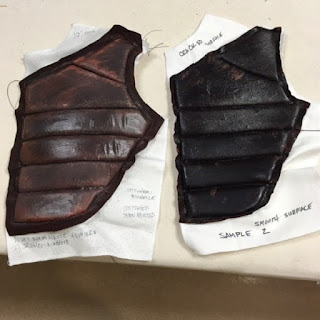 Still more of the samples with various techniques employed. Note that each sample and technique variant is labeled for accurate record keeping. We probably made somewhere around two dozen of these before we hit on some good options to share with the museum's representative. 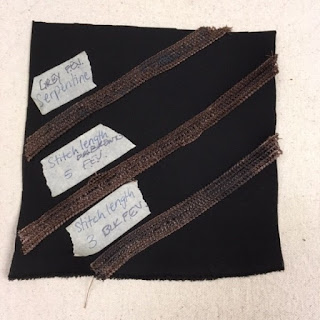 If you take a look at the research pinboard for this project, you'll notice in some images that the stillsuits have a "stripey" design element in sections, which we referred to in the shop as "filtration tubes." in addition to the samples we created for the pad structures, we also made various samples for these filtration sections using actual filtration mesh dyed, stitched and painted in various ways. This image shows one of those samples.

What Steve Dreyer, the museum representative, finally chose for the look of their suite was a pad skin created from a mottle-dyed brown spandex coated with a PVA clear-coat layer, and filtration tubes of a mottle-dyed mesh tubes stitched and painted back into with three colors of French Enamel Varnish. With this information settled upon, we could move on to constructing the suit itself.

I'm going to end this there, but i promise it won't be another half-a-year til i get around to the next installment!