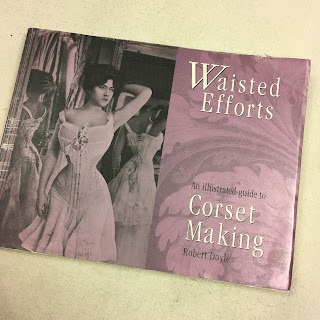 I’m going to be teaching a new-to-me course in the fall, for which one of the main projects concerns corsetry. Back in undergrad, i thought for a while that i might specialize in corsetry because i found the architectural nature of their construction so interesting, and the range of materials and shapes over time to be historically and aesthetically appealing. In the intervening time, my career took me in other directions, but this class gives me the opportunity to return to the topic.

When i made my first corset back in 1993 (heavily-boned conical tabbed stays), the go-to references my professor used were Nora Waugh’s Corsets and Crinolines and Janet Arnold’s various Patterns of Fashion books. So, in preparation for teaching this class in the fall, I’ve been tracking down what books have been published on the topic of corsetry in the intervening 25(!) years. I’ll be reviewing them here in La Bricoleuse as I go, starting with Robert Doyle’s 1999 book, Waisted Efforts: An Illustrated Guide to Corset Making.

This book is currently out of print with used copies selling for upwards of $150 in some online marketplaces, so it’s not something the average costumer is likely to pick up idly unless it’s already part of your workplace’s library. I accessed a copy through interlibrary loan and i’ve begun the process of securing a limited educational-use reprint through my campus bookstore in case my students want a physical copy of their own because my tl;dr verdict is: if i were choosing one book to be my ONLY reference on corset-making, this would not be it, but if i’m assembling a library of corsetry, sure, it’s got a place in that.

Doyle notes in his preface that the goal in writing this book was to add to the work of Nora Waugh and Janet Arnold, in terms of the author’s corset making experience in the intervening years since those scholars’ work was published. Waisted Efforts thus serves as a chronicle of Doyle’s career in translating period corset pattern shapes into tangible, functional garments. He works from a drafted body block and superimposes the corset structures over that in creating his corset drafts, and he does an adequate job of documenting how he does so.

If you have never drafted a torso sloper, period, I wouldn’t recommend this as a reference for your first stab at that; the quality of the photographs (black and white, low res) is poor—there are better references out there in terms of clarity. However, if you understand the gist of a body-block draft, Doyle’s diagrams illustrate how the corset shapes correspond in a way i found fairly clear. His chapters progress chronologically from the 16th century to the 20th, but his approach is meandering and irregular such that some periods are better documented/addressed than others.

The book’s lengthy introduction serves as a general overview of Western women’s fashion from the Middle Ages to Dior, which strikes me as a waste of space. Anyone using this book likely already knows everything covered in it, and the images are mere silhouettes of costume shapes found in every survey of Western fashion out there. He doesn’t cover any new ground or make any novel conjecture in terms of the interplay between fashion and sociopolitical forces, so honestly, unless one is totally new to this whole corsetry topic, the intro is skippable.

Overall, prepare yourself for an atrocious lack of copy editing—the text is rife with spelling errors, homophone mix-ups, misuse of punctuation, and sentence fragments to such a degree that it reads like a direct transcription of extemporaneous speech. I found this annoying at the outset but when it became clear the whole book was going to read like a rough draft, i started over with reading for informational content alone. If you approach it with that in mind, you can usually figure out what’s intended and the instructional sections are accompanied by enough diagrams to be serviceable. There are enough interesting historical notes (such as a digression on how people made corset laces in the 16th century using a tool called a lucet, or a note on cleaning corsets with bread in the 19th century) that I ultimately enjoyed reading the book. If i were doing preliminary research on the construction of a period corset, i'd consult this book along with other references before starting my pattern draft.


The book is an odd shape--oblong, after the Janet Arnold texts, except unlike those references it has no full-page systematic gridded/scalable pattern info. It's as if it was initially graphically-designed to be a workbook-sized volume a la Waugh, but somebody decided to kludge it into the Arnoldian format just so it could get shelved with those books or something. Nope, i don't like it.

My final & perhaps biggest grouse about this book is its lack of a bibliography or scholarly citations for the historical references cited throughout and occasionally (purportedly) quoted at length verbatim. The author provides clues such that you can probably track them down with a bit of effort, particularly in an age of increasingly searchable digitized archival materials, but the academic snob in me finds it an egregious omission.

So yeah, to reiterate my tl;dr—I’m going to add this book to the working library of corset references in our costume shop, but if you spent your whole career never having read it, you could still turn out some well-made corsetry with the other references out there currently in print.