EXHIBIT REVIEW: Inside Her Clothes at the Goldstein Museum of Design, St. Paul, MN

Yesterday I visited the Goldstein Museum of Design on the St. Paul campus of the University of Minnesota. Their current exhibit (through September 3, 2017) is called Inside Her Clothes, featuring selections from their fashion/clothing collection exhibited inside-out, or arranged with the garment open so you can see the interior. I'll cut to the chase: it's fantastic, and if you can at all get there to check it out, go.

It's set up in a dedicated gallery similar in size to the one at the Museum at FIT--not as huge as the exhibits mounted by the Met, but nothing to sneeze at. There are thirty-two garments on display with a wealth of information about each one. There is no admission charge so even if you are strapped for cash you can go; there's a donations box by the door if you want to give them something, and merchandise like notecards, too.

I took a lot of photographs, but I think you'll find that the images only serve to make you want to go see the exhibit in person, so you could focus on whatever details interested you most, and for most of these pieces, get as close to them (without touching) as you like. 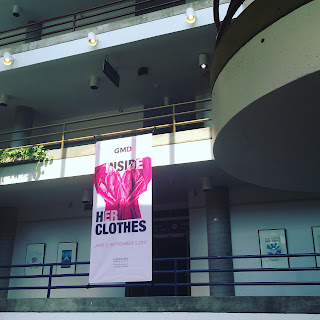 The Goldstein Museum is housed within the department of design at McNeal Hall on the UMN-St. Paul campus. I took the bus there, but it seemed like there was nearby parking, too, since it's summer. Once the fall semester starts that might change but right now the campus is a ghostly wasteland of solitude. I only saw three other people while i was there, and one of them was the docent. 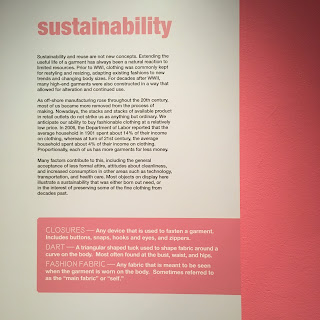 I know you can't really read this, but i wanted to show readers what the information imparted is like throughout the gallery. There are blocks of info like this on the walls near each thematic section at a fairly large font size, and withing the pink box are vocabulary definitions describing sewing terms that visitors not well-versed in garment construction might wonder about, like "selvedge" or "dart" or "felled seam." 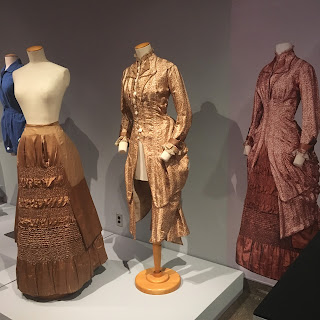 This image gives you a good idea what the displays are like as a whole. At right is a full-size photograph on the back wall of the gown on a form as it is was intended to be worn. On the center and left are the two pieces displayed separately so that, in this case, visitors can observe how the underskirt has been cut and pieced to feature the rich smocked silk fabric at center front where the polonaise opens to expose it, and the rest of the skirt which is normally hidden by the overgarment has been cut from a plain but sturdy canvas. 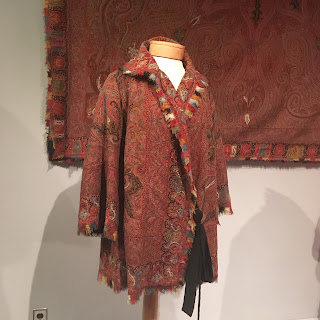 For this display, at the rear is a surviving (but damaged) wool paisley shawl from the early 19th century, and in the foreground a 1920s jacket cut from a similar shawl which the maker must have inherited or found in a resale shop. This one is part of that "Sustainability" section in which the examples displayed show aspects of reuse and what we'd now call "upcycling." 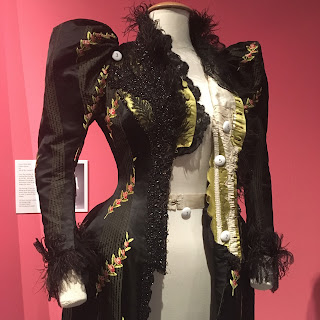 This impeccably preserved 1890s bodice is on the form with its front opening folded back, so you can see how its various interior closures work. You can make out the stabilizing waist-tape here, as well as buttons, hooks, and bars. The little white circles are numbered buttons which correspond to detail information posted along with a photo of the bodice when closed properly. 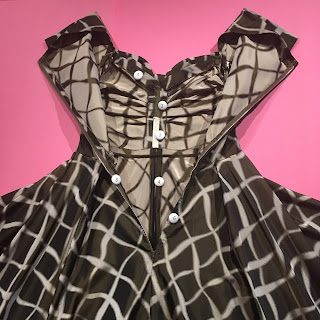 This is a 1950s Dior gown shown open up the center back to reveal the interior boning on the seams and such, but what i find so fascinating about it is the fabric design inverted on the interior. Looked like a double-faced sateen but i couldn't touch it so i don't know. 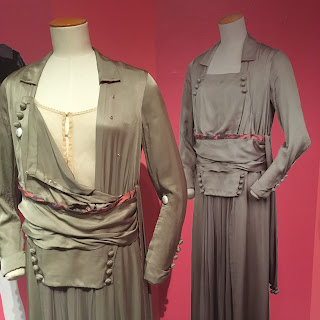 Even this relaxed-looking late-1910s gown has an interior support structure, as eveidenced by the open closure revealing the light muslin underlining/chemise. 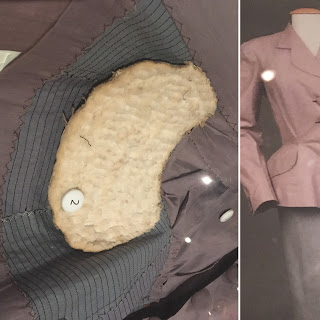 Tailored Balenciaga jacket with that extreme hipspring, and at left is the jacket lying open so you can see the hip padding and layered canvas machine-stitched in rows to create the shape. 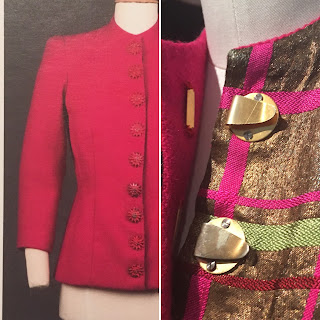 Schaiparelli shocking pink tailored jacket, and the secret to such a sleek front placket: ornamental "buttons" backed with these huge hooks and bars. And look at that secretly-zany lining! 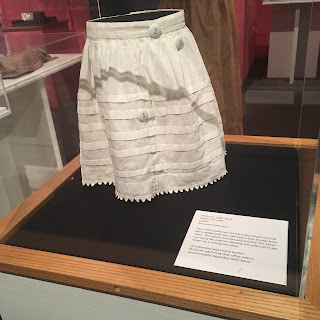 Look at this wee petticoat for a tiny, tiny child! There was some speculation about whether the number of tucks were designed to be let out as the child grew taller to prolong the life of the garment. 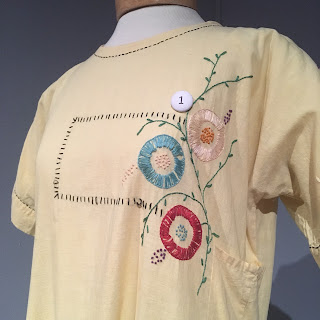 Beautiful embroidery on this 1920s shift dress cut in two pieces, selvedge to selvedge. The display had a cutting diagram for this gown (there's a second iteration on display as well, from another maker/donor), which was made without a pattern, drafting directly onto the fabric. 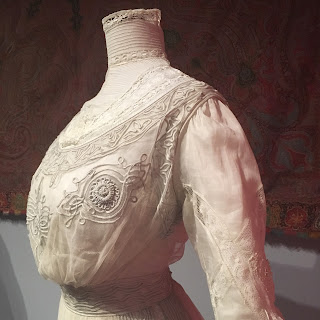 That's not nearly all of what was on display--i couldn't get good photos of the bias gowns with unusual closures/cutting methods, for example--so again, if you can find a way to go check out this exhibit before it closes, do so. It's well worth your time.