Frankenstein's Monster for the Museum of Science Fiction

I'm (tentatively) resuming this blog now that my year of a doubled teaching load is concluding--it looks like I'll have a bit more time for it once again and I have some cool things worth writing about! The first of these is an exhibit we've been involved with for the Museum of Science Fiction, for their upcoming Escape Velocity conference May 25-27, at which a bicentennial celebration of Mary Shelley's Frankenstein will be held.

We were initially contacted about working on the Creature himself (as the monster is known in the novel). The sculpture/SFX studio Tom Spina Designs had signed on to produce the head and the hands of the display, but we here at the UNC-Chapel Hill department of dramatic art were asked to develop a display mannequin from those pieces and create his clothing.

Because this needed to be a pack-and-travel display, we decided to modify a department store mannequin for the Creature's body, since those are designed to be easily dis- and re-assembled. 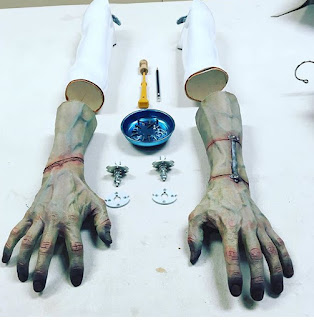 Above are the hands created by the artists at Tom Spina Designs, and the hardware I installed to mount them on those modified mannequin arms you see at the top of the pic. 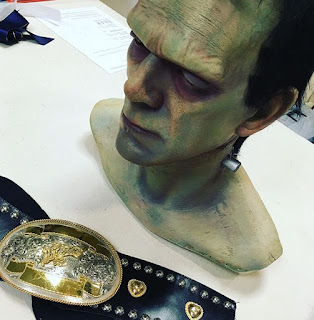 The incredibly realistic head, also by Tom Spina Designs, sitting on my table before I mounted it in the shoulders of our form. He seems like he's puzzled by that disco-wrestler belt which appeared in this season's Tartuffe, right? 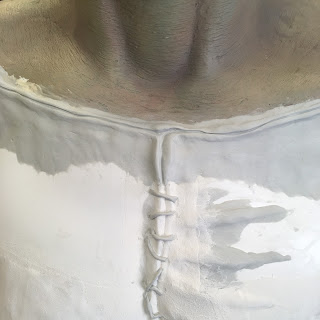 I neglected to get a full-length shot of the mannequin itself when we cut the neck out and seated the head in the opening, but here's a process shot of the suture/scar sculpt conducted by pre-med undergraduate Olga Prokunina. 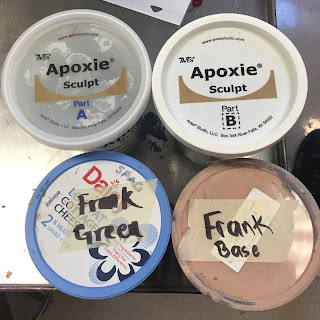 Olga used a product called Apoxie Sculpt (a two part moldable clay), gesso, China silk maché, and her knowledge of anatomy to inform the look of the body's ribcage & suture seams (shown with two of the paints used for his body). 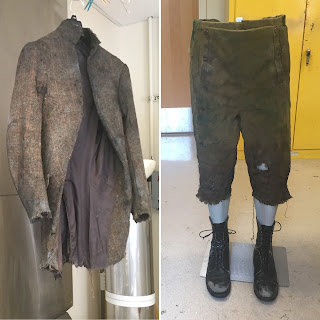 We worked with UNC-CH English professors Laurie Langbauer and Jeanne Moskai and their students to determine the nature of the clothing the Creature would have worn as denoted in the text of the novel itself--salvaged clothing of the period like fall-front breeches and a cutaway coat. Costume production graduate students Michelle Bentley and Jane Reichard then produced the garments you see above, which were subsequently aged/distressed by me in our dye/paint facility.

Next up, I had to paint Olga's grotesque torso sculpt to fit in with the extant head and hands, a multilayered process involving more gesso and many layers of paint! 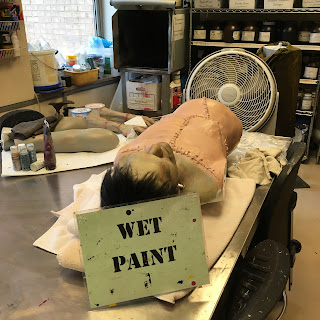 Spa day for the Creature, apparently. A base coat of a warm tone which will be overwashed with lots of dead and cold tones... 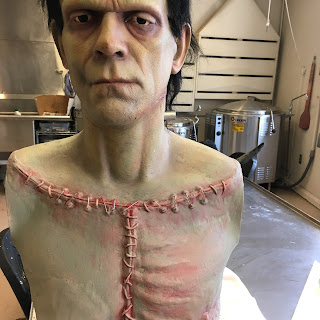 Above: the point at which I added seepage and painful shades to the sutures, staples, and seams. I appreciate how Olga used not only her knowledge of anatomy but also sewing in this part of the sculpt--those drag lines at right are what happens when you sew a seam unevenly. In the novel, Victor Frankenstein bemoans his poor stitching as a defect of the Creature's construction. 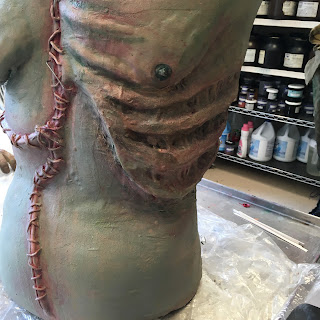 Detail shot of the gross sunken ribs on one side of his body. 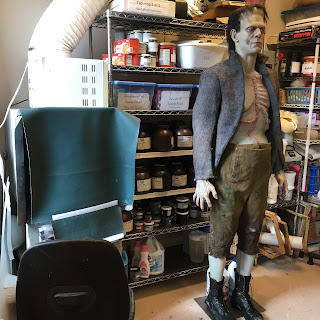 And here he is, the full-length shot of the completed Creature!