I'm so pleased to be resuming costume professional interviews as a regular thing here in the blog! For the first installment, I've talked with UNC-Chapel Hill alumna Max Epps ('17), who is currently working as a first hand at Royal Design House of New Orleans. Have you ever wondered what went into the Mardi Gras court costumes? Max shares some deets with us!


La Bricoleuse: What are your responsibilities as a first hand at Royal Design House in New Orleans?


Max Epps: Most of my time is spent cutting and constructing patterns I'm handed from my draper, but my responsibilities run the gamut from prepping and cutting fabrics, pattern alterations, construction, draping/drafting patterns, and craft work.


The workflow at RDH is collaborative - I don't have specific builds that I'm completely responsible for from start to finish; rather the entire team will touch a gown or costume at some point during the build to keep the work moving forward.  The only thing I do not do is fittings unless absolutely essential.  Our clients believe in the mystery and secrecy behind Mardi Gras royal courts, and we honor that by limiting the people in the fittings to our designer and draper in order to protect the identities of our kings, queens and court members.  We don't take fitting photos except in rare circumstances.


LB: Could you describe the shop where you work—how many teams, what the positions are, are there craftspeople/dyers, etc.?


ME: Our team is relatively small considering our seasonal workload. There are four full-time employees - Katie Johnson (owner/designer), Ashley Sehorn (owner/draper), our stock manager Corinne (each club we work with has its own costume stock that is pulled from every season), and myself.  We also have three seasonal employees, one who focuses on alterations, one for menswear construction, and one for appliqué and beadwork.  While we all have go-to work, most of us are trained on craftwork, appliqué and beading.


LB: For readers who aren’t familiar with the Mardi Gras Kings and Queens, can you describe what those costumes are that RDH specializes in?


ME: The Mardi Gras silhouette and dress code is strict and steeped in tradition.  A queen's "uniform" consists of a gown (usually strapless with variable silhouettes), a foundation corset with a steel harness that travels over the shoulder, a Medici collar that is wired to the shoulders of the harness, an elaborately decorated mantle (15-25 ft and weighing as much as 60lb) that hooks onto the harness between the shoulderblades, close-toed heels, opera length gloves, and a crown and scepter (usually crafted by a local jeweler).


Queens’ gowns are usually a combination of bridal and pageant.  Most gowns are white satin, sometimes with a silver or gold overlay, and a lace layer with beading and embroidery.  Depending on the queen's budget, the lace overlay is shopped yardage, or will be designed by Katie Johnson and custom beaded by an outside company.  There are exceptions to a queen's ensemble, depending on whether the club has a theme that calls for specific period costumes.


Most kings wear the same silhouette (again, with exceptions based on the theme of the club or ball) that is a serious riff on a Tudor jerkin, if I had to pick a time period for reference.  In the industry we call them tunics or suits.  The tunic has a bodice that closes in the back with a button placket or zipper, a stand collar, a two-piece sleeve with a sleeve cape or poof, and a paneled skirt.  The tunics are usually white velvet and coated with beaded appliqué, rhinestones and trim.  He wears a harness made from webbing underneath his costume with attachment points at the shoulders to support his mantle.  Small button holes are worked into the tunic to allow access to the harness.  The king also wears gloves, bloomers, white tights, white shoes, a pageboy wig, crown and scepter.


LB: You have also worked for a number of well-known regional theatres, theme attractions, and so forth. Could you talk a bit about the similarities and differences between working for a regional theatre, Broadway shop, and the Royal Design House?


ME: The day-to-day at RDH is similar to working in a Broadway shop, in that everyone has a hand in working on pieces and we are working toward several deadlines at once.  It's kind of like having rolling tech weeks.  Not only do we take commissions from the many clubs in the city, we also manage several club dens (costume stocks) and provide support staff at the balls of the clubs that retain our services.  The balls are white tie and tail events, and the women must wear floor length gowns and opera gloves.


It's not just the court who wear costumes - any (male) member of the club that chooses to mask (or "cast") must wear a club costume that includes a hat, mask and gloves.  The Carnival season begins soon after Christmas and ends at midnight on Ash Wednesday (this date varies).  Within this window we manage the balls of several clubs, which entails load-in, wardrobe supervision, and strike (another company manages costume transportation to and from the ball locations).  At the beginning of the season we'll have a ball every week or so, and by the end we are staffing several a week.


LB: What is your favorite tool or piece of shop equipment?


ME: My snips - Gingher 4".  I always have them near me and I just like the way they feel in my hand.


LB: How long have you been working in the costume field, and how did you get your start?


ME: I fell into costuming around 2007 at Florida State, where I was pursuing a performance degree.  I took an elective costume tech course and immediately loved how I could combine my problem-solving skills with a creative outlet.  After graduation I was cast in a show and ended up volunteering in the costume shop after rehearsal.  It didn't take long for me to notice that I was having way more fun in the shop than onstage, and after that experience I switched gears permanently.


LB: Can you tell us about a recent project you worked on, perhaps share a pic?


ME: My first big project was a gown for the Queen of Mystery last season, and she turned out beautifully.  We found the lace yardage, and I had to do a lot of delicate shaping and piecing to make it perfect.  We then went back in and added stones to make her really sparkle. 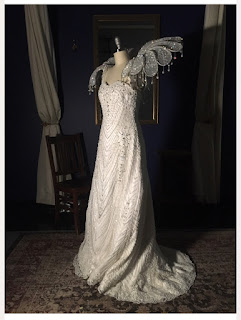 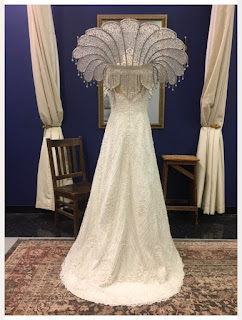 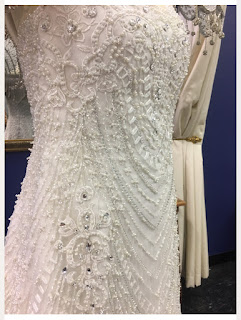 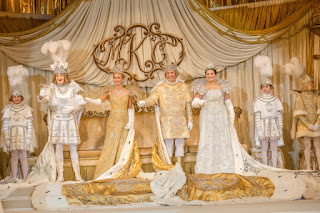 ME: The above court photo (credit: Josh Brasted) is the reception of Rex and the Queen of Carnival (both in gold) by Comus and his Queen (both in white/silver), accompanied by their pages in matching colors.  This meeting of the courts is the culmination of Mardi Gras festivities.

The only pieces we made in this photo are Rex's suit and his and his queen's mantles (mantles were made several years ago now).  Comus and Rex have separate balls on Mardi Gras day and then the Rex court joins Comus.  Our staff manages the Comus ball, not Rex.

Thanks so much for your time and the wonderful images of your lovely work, Max. Past interviews at the old bloghost can be found under the interviews LiveJournal tag.