Another installment in my series of interviews with alumni of our graduate program at UNC-Chapel Hill, to provide a peek into what a range of careers one might pursue with our MFA in costume production. For this post, I corresponded with recent graduate Robin Ankerich (MFA '18)--here's our interview:


For a bit of background for the readers, what is your official job title?

My current job title is draper/costume shop floor supervisor at The University of
Central Florida in Orlando.


Can you tell us about the department in which you work—how many shows, how many students (rough guess is fine), anything that communicates the nature of the academic and theatrical-performance context for your job.

The University of Central Florida has enrollment somewhere around 67,000, and within the Theatre Department, enrollment is somewhere between 300 - 350 students split between six undergraduate and five graduate degrees.

Theatre UCF breaks the season into seven shows during the academic year, three in the fall and three during the spring, and one over the summer session. These shows are a mix of mainstage and black box productions. The last production of the spring is connected with a two-week-long event called "UCF Celebrates the Arts" and is performed downtown in 2,700-seat Walt Disney Theatre in the Dr. Phillips Center for the Performing Arts. After the summer show slot, there is also a new play series where new works are performed with minimal technical support.


Could you describe the costume facilities at your university--how many employees/student workers, what different positions there entail, specialty equipment the shop owns, etc?

As growing universities are ever-evolving, the costume shop is located within the Theatre building where the performance spaces are located. The rehearsal halls and design studios are located across campus in the Center for Performing Arts. Our costume shop consists of a private office space for both the costume shop manager and myself, the costume shop floor supervisor. Outside our offices we have a four-seat makeup alley that can be used to store hats or hold wig fittings as needed. The craft room is outfitted with a large dye vat, stove top, sink, washer and dryer, small work table, and a few storage cabinets. Within the main space of the costume shop, the space is outfitted with five rolling cutting tables, two industrial irons, an embroidery machine, a class set of the Bernina 1008 sewing machines, five domestic overlock machines, an industrial blind-hem machine, a coverstitch machine, and a Bernina 217 industrial sewing machine. Connected to the costume shop is one of two separate costume storage spaces. Down the hall from the costume shop we have two separate fitting/dressing rooms; these rooms are connected with a 24-seat makeup alley.

As far as the breakdown of people working in the shop at any given time, both the shop manager and myself are full-time staff with teaching responsibilities. There are also two costume design professors on staff. We have a couple of students who fulfill their work study assignments, as well as 8-12 scholarship students fulfilling their 60 hrs/semester requirement by working in the shop. Then the costume focused students can satisfy their production credits by working 60 hours a semester in the costume shop or by performing a specific role for a given production (first hand, draper, assistant to the designer, etc.). Lastly, the students within costume construction also have a lab requirement of 45 hours in the shop over the course of the semester. To round out large productions or quick turnarounds, we occasionally hire in overhire stitchers.


Tell us about any classes you teach—topics, enrollment size, etc. And if it changes each semester, what are you teaching right now? Or, if you don't teach as part of your job, who does and what courses are offered?

This semester, I took over teaching the patterning independent study. On staff there are two costume design professors, and there is no full-time professor focused strictly in costume construction. So, this series of classes has been setup not to burden anyone’s course load. This series is broken into three separate sections, each a 3-credit hour course. Each week, all three levels meet together for one hour. During that time, they present their works/problems from the week’s assignments, new material that might be hard to grasp from following a textbook is demonstrated, and the next week’s assignments are assigned. Section 1 covers dart manipulation, dart equivalents, and drafting bodice slopers from a couple of different methods. Section 2 covers added fullness, yokes, and collars. And Section 3 covers skirts and sleeves. This semester, I have allowed eight students to take patterning and they are spread across all three sections.

Now that I have made it through almost two full semesters at UCF, I have pinpointed sewing skills and techniques that students might miss in their education if not brought up through working on the productions. So, Fall 2019, I am looking forward to hopefully offering a Special Topics course, 3 credits, on advanced costume construction to cover all the odds and ends students should know before graduating with a costume-focused undergraduate degree anything from pin tucks to invisible zippers, bone casings to hook and eye tape.


Can you talk about some of the projects you have worked on recently?

Over the past few weeks, we transitioned from Street of Crocodiles--which was set in the 1940s and only had one made-to-order dress and many pulled looks--to Titanic with a cast of 56 and 3-5 looks each.

On paper, Titanic has a seven-week period in the costume shop, but the first two weeks overlapped with the final week of alteration and tech week for Street of Crocodiles. So in between classes, once we were free from Street of Crocodiles, I draped the three looks for Madeline Astor, who is a first-class woman, and is 7 months pregnant according to song lyrics. She has an arrival suit, a promenade look, and an evening gown. I then turned my attention to Mrs. Thayer’s arrival blouse with a sailor collar, skirts, and shaped belt, as well as her evening gown, because there was nothing suitable for her 4’8’’ stature in stock or to be rented.

Next on the list were the three Kates who needed skirts, three faux-fur stoles to round out our stock of coats and fur, and a dress for Ida Straus (which was later cut after being mocked-up when she was cut from the musical number it would have be worn). As the other 20-something women had their fittings with the pulled/purchased garments, we discovered two more women’s looks that we wanted to make after what we had in stock did not fit or achieve the proper feel of the character.

After the whirlwind turnaround for patterns and mock-ups before the students left on Spring Break, I was then able to churn out the fashion fabric version for a fabric fitting in a week and a half. Once those were moving forward smoothly, I turned my attention to marking/prepping the hundreds of costumes that still needed to be altered for the 30-something men.


What is your favorite must-have tool or piece of equipment for the workroom, and why?

My favorite piece of equipment is the Bernina 217 Industrial sewing machine that I pulled out of storage. When I arrived in the shop, there was a Babylock domestic machine used by the previous floor supervisor. Because it was not ergonomic, after a show or two trying to make to make that machine work, I pulled out the industrial that had been in storage for a few years. After a good oiling, new needle, and messing with the tension, I got it up and running. I had briefly forgotten the joy of the speed and efficiency of an industrial sewing machine. The thing I love most about this particular machine is that not only does it have a zig-zag on top of the standard straight stitch, but you can set a dial to allow you to switch back and forth between stitch sizes in one smooth movement, allowing you to do button holes and blind hems.


What is your background in the area of academia and costume production, and how did you come to your current position?

My background has been focused on costume construction and draping ever since my first draping class my second year of undergrad. I received my BFA in theatre design and technology with a focus in costume construction from Columbus State University in Columbus, GA. After graduating, I spent a few years working for different companies furthering my experience. I then attended the University of North Carolina at Chapel Hill, where I received my MFA in costume production.

After graduating, I returned to Utah Shakespeare Festival for the third summer in a row while I figured out my next move. I interviewed for jobs around the country and finally accepted my current position. I was drawn to the opportunity to drape on all the theatre department’s productions while also teaching and mentoring undergraduate students.


What advice would you give to readers who aspire to work in costume production at the university level?

To readers wishing to work at the university level, they should know that most universities require an MFA to teach classes. I would also suggest working on time management skills. Unlike regional theatres, university theatres run parallel to the academic calendar, so those working in theatre at the university level must have a keen sense of how long tasks take to complete, so that managing both course work and production responsibilities does not become overwhelming.


Can you share a photo of a recent project? 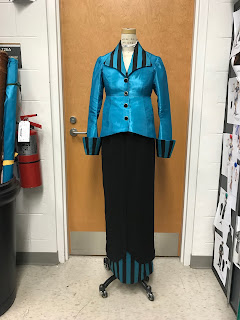 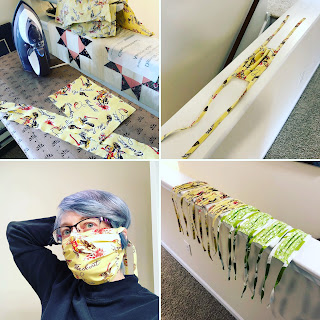 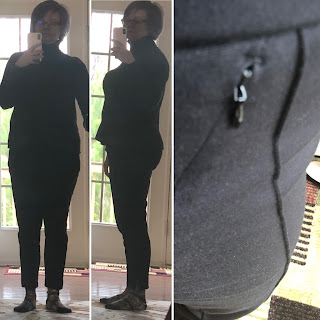