I recently had the excellent good fortune to tour the Garment District factory of M&S Schmalberg, the only custom fabric flower company in America. In their seventh-floor commercial space, i met with Adam Brand, the fourth generation of the family in the business. Adam was kind enough to sit down and talk with me about his family's firm and give me a tour of the facility. 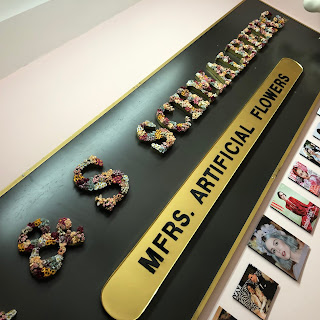 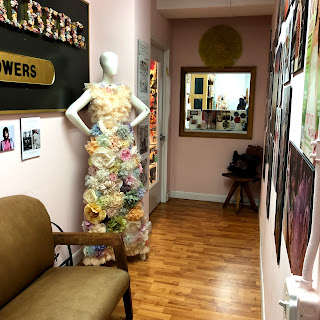 Flower-bedecked dress in the foyer of the factory. 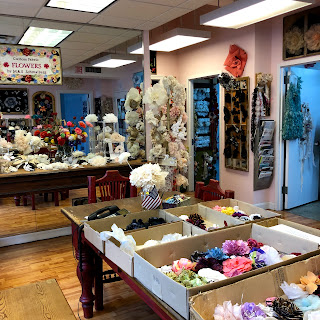 Just my luck, they had a liquidation sale of single flowers set out in the showroom!

In 1916, when brothers Morris and Samuel Schmalberg founded their company, M&S Schmalberg was only one among dozens of artificial flower manufacturers based in New York City's Garment District. In the early 20th century, hand-made fabric flowers were big business, used to adorn thousands of hats, gowns, accessories, and interior decor. In those days, Garment District manufacturers produced 75% of all women's and children's clothing made in America. Business for the Schmalberg's beautiful product bloomed.

In the intervening decades, garment production moved overseas, hat styles became more casual and streamlined, and fabric flowers became more of a home decor product than one of dress and adornment. Contemporary mass-produced fabric flowers are made in huge quantity at pennies apiece in Chinese factories. These modern flowers are created to mimic a florist product--designed to look like cut flowers for arrangements and wreaths and so forth. They are meant to be indistinguishable from real flowers and often incorporate plastic and wire elements in the stems and foliage.

Not so for the flowers from Schmalberg. If Chinese-made bulk flowers are pret-a-porter, Schmalberg's flowers are haute couture...often literally! On the day of my tour, the workroom was filling an order of large-diameter silk flowers destined to adorn a Vera Wang collection. 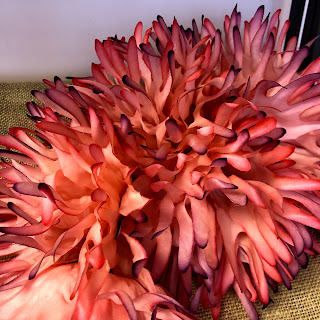 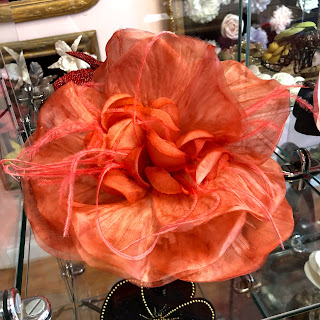 This one also incorporated feather flues.


For my tour, Adam first took me to the die library shelves, where the company's vast collection of petal and leaf cutters are stored. The dies come in all sorts of beautiful shapes and are honed to a razor sharpness. In tandem with an industrial press, they cut through the textiles chosen by clients to fulfill their custom flower orders. 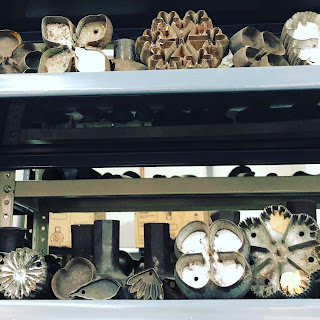 Just some of the library of cutting dies for creating the petal and leaf shapes. 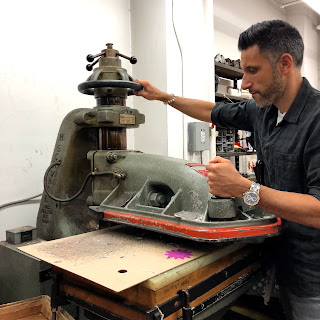 
Each die can cut up to 20 layers of silk organza or as few as three layers of garment-weight leather. 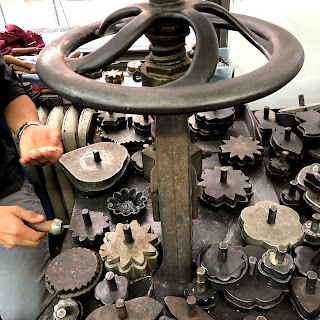 One of three stations for embossing the cut petals using heat and shaping dies.

This embosser pictured above is gas-driven, and on a sweltering summer day, the worker at this station was really feeling the heat. This gas-heat machine is one of the oldest pieces of machinery in the factory. Adam showed me two more embossing stations with newer, electric-powered heat plates. 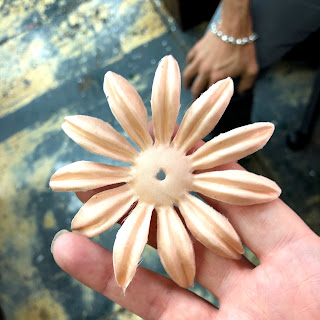 After all the elements of the flower have been die-cut and heat-embossed, they are delivered to the assembly stations for production. I didn't get a photo of this area (the technicians there were quite busy and I didn't want to interrupt to ask their permission to take a picture) but imagine a work table on which stacks of each component are arranged, with an artisan layering pieces onto a central wire stem. When the artisan finishes the assembly, the flower is hung by the stem on one of the many lines strung above the station. When all have been completed for the order or the batch, a picker comes by to transport the flowers to pack-and-ship. 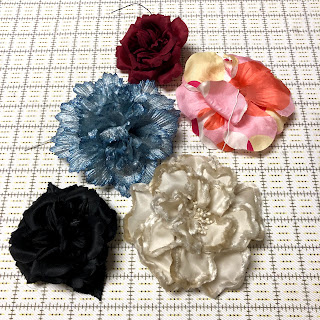 The selection of flowers I bought in the sale!

After the tour, Adam sat down with me in the consultation salon to talk about how the business has changed in the 21st century, and to share a bit of his family's personal story.

When the Garment District boomed in the early 20th century, the Schmalbergs didn't have to seek out their consumers--the first-floor retail location sold to milliners and home stitchers, and the wholesale division sold to neighboring hat and garment production houses. Now, though, with globalization and the fragmentation of the supply chain, Adam has made it a goal to establish a presence for the factory in many different digital spaces. The factory has an Etsy shop, an Amazon store, an Instagram account, and a Facebook page with accompanying store. They work with couture houses (like the aforementioned Vera Wang), with Broadway designers, FIT students, wedding parties, international opera and ballet, you name it.

Adam Brand also told me the family history as to how his line of the family came to run Schmalberg.

His great-great grandmother was a sister of Morris and Samuel Schmalberg. In the 1910s, she married and remained in Europe to raise a family with her husband. The Brands had two daughters and two sons, one of whom was Harold Brand, Adam's grandfather. When Harold was 13 years old, Nazi soldiers imprisoned the entire family in a work camp in Poland. Being a physically fit teen and already a skilled artisan, the camp guards forced Harold to labor as a woodworker. His parents, brother, and two sisters were murdered.

Upon the Allied victory over the Nazi powers, soldiers attempted to help camp survivors find any extended family who might take them in. Harold had uncles in New York City, Morris and Sam Schmalberg, who paid his passage to America, gave him a job in their flower factory, and helped him to become a US citizen. Howard threw himself into learning the flower trade, and when none of the Schmalbergs' children wanted to take over the business, Howard gladly stepped into its leadership. His children, Warren and Debra took over from him, and Warren's son Adam is now the fourth-generation of the family to work the flower trade!

You can read much more about the business history in this comprehensive article from the New York Times.