Book review: Some Girls, Some Hats, and Hitler

I recently finished reading Some Girls, Some Hats, and Hitler: A True Love Story Rediscovered by Trudi Kanter, and i knew the minute i put it down that I ought to post my review to the blog.

While i can recommend this gripping memoir to a wide range of readers, it is of particular interest to milliners and hat enthusiasts. Trudi Ehrlich began her career as an accomplished, fashionable milliner in Vienna, Austria in the 1920s. She trained in Paris as a young girl and worked her way up from a milliner's assistant to the owner/operator of her own boutique. She made hats for the wives of the wealthy, the stars of the stage, and the best-dressed courtesans. And then the Nazis invaded Austria.

A Jewish woman herself, Trudi witnessed first-hand the brutal persecution of Jewish Viennese citizens and immediately began formulating plans to get herself, her husband, and her parents out of harm's way. She also begins to express a subtle protest to the German invasion through her hat designs, creating a collection with copious veiling so that women might more easily obscure their features and feel as if they are behind a barrier of protection, however flimsy. Through a series of visa machinations and calling in sponsorships from elegant Londoners who had patronized her hat shop while on holiday in Vienna, Trudi pulls every possible string to save her loved ones.

This book--originally published in the 1980s--is a beautiful tribute to her beloved husband Walter and a testament to her determination to survive a brutal dictatorship. It is also an amazing peek into the world of the working milliner of the time, with lengthy descriptions of many different production studios and hat factories, fine millinery salons, and information about the workroom staffing setup. I found myself highlighting many passages for their clarity on aspects of the trade which i've not read elsewhere.

I'm so glad that this important memoir was rediscovered and rereleased in a new edition for the 21st century reader. Although she wasn't a writer by trade, Trudi is at times a poetic narrator with whom the reader can easily sympathize. 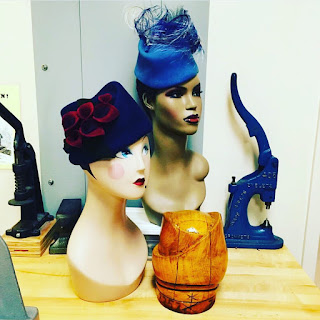 Two styles of hat and the vintage 1940s block they were made upon.
Left is by Erin Torkelson, right is by Kim Fraser of Hatnip Hats