The theatre season has begun and the university is back in session, which means a bus commute is part of my life again. Last year, I got into listening to audiobooks during the commute, but I discovered a couple of new-to-me podcasts over the summer and am working my way through those. Both of them are topical to this blog, so i thought i would share! 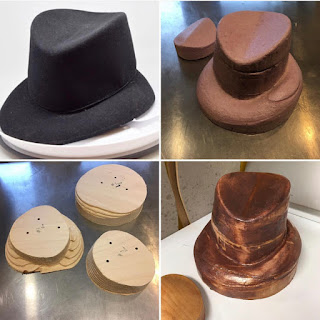 Unrelated image of a vintage hat which former student Athene Wright 3D scanned, then cleaned up the file and carved a block for the shape using a CDC ShopBot router.


The first is an excellent millinery-themed podcast produced by Millinery.info, the majority of which is straightforward interviews with working milliners in the world today. Participants range from theatrical/film/TV milliners to those who cater to the wedding and racing markets. Because the site owners are based in Australia, the subjects are predominantly Australian milliners, but they do travel frequently and have interviewed hatmakers in Europe and the US as well (perhaps beyond, I haven't listened to them all yet!).

Because the podcast is milliners talking to milliners, you get a lot of good tips about tools/equipment and various style of running a very particular business.  The production values on it are fairly workmanlike--sometimes the sound quality isn't the best, but the information imparted is always worth a listen regardless. It's largely commercial-free too, with sponsors being mentioned at the beginning and/or end of the episode and no interruptions mid-episode for a word from the sponsors. Each episode is around 45 minutes long.

The second is Dressed: The History of Fashion, which is affiliated with HowStuffWorks. I got sucked into this one by way of millinery as well--they have an episode on the bloodthirsty feather trade of the late 19th century called "Murderous Millinery"--but their topics run the gamut of the history of dress and adornment. Episodes include everything from "The Origin of the Swimsuit" to "50 Years of the Ebony Fashion Fair" to "Charles James: Genius Deconstructed."

This one has fairly slick production values and sponsorships which include commercials incorporated into the podcast. These episodes are all over the map in length, some as short as ten minutes while others come in at closer to an hour. It's been running weekly since early 2018, so I'm looking forward to working my way through the back episodes!

What fashion/costume podcasts do you recommend?