My students presented their projects for a unit on reshaping an actor's body. We talked about how mascot structures are devised for character costumes (sports teams, brand mascots like Mr. Peanut or the Target dog, and cartoon creatures in live performances like Sesame Street Live!).

Our new program director, Triffin Morris, gave a guest lecture about her methods in creating natural-looking body padding for characters like the Radio City Music Hall Christmas Spectacular Santa Clauses (all 80 of them!) and the hefty giant Hagrid in Harry Potter and the Cursed Child (played by an actor who must also play seven other roles, none of which are big giants). I let the students choose which style of reshaping project to do--that way if someone had, say, worked at a mascot company before grad school, they could choose the less familiar topic to explore.

Two of my students presented naturalistic effects and two did half-scale patterns for mascot pod bodies. Check out some photos: 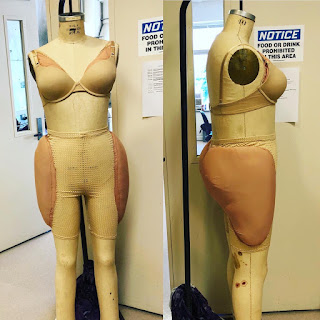 First-year grad Alex Hagman created this set of padding to change a male-bodied classmate into a female-bodied character. The pads are built from layers of reticulated foam, skinned in milliskin and attached to an athletic mesh base garment. They can be washed in a washing machine. 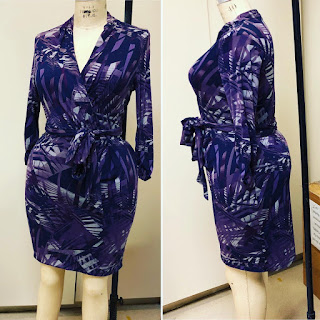 Here's the look with a dress over top of the padding.
Very Edna Turnblad! 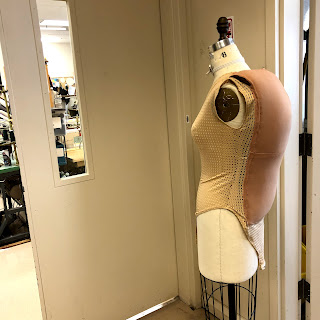 First-year grad Sherry Wu was inspired by images of the Hunchback of Notre Dame in creating this dowager's hump padding. She also used reticulated foam layers, milliskin, and athletic mesh. 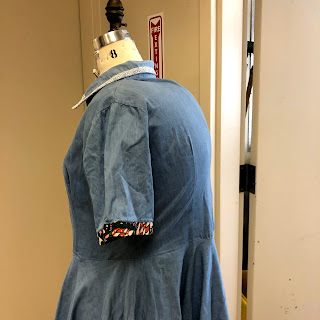 Here's Sherry's padding with a dress on over it. 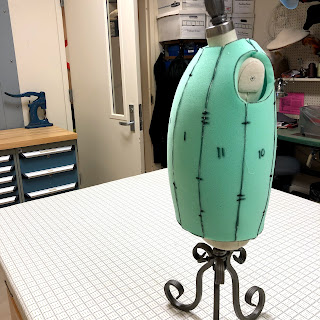 Second-year grad Lauren Woods created this pod pattern for the character of "Shaun the Sheep" from the Wallace & Gromit cartoons. Shaun is very barrel-shaped and rounder in the front than the back. (Pod projects are done half-scale for space conservation in the shop.) 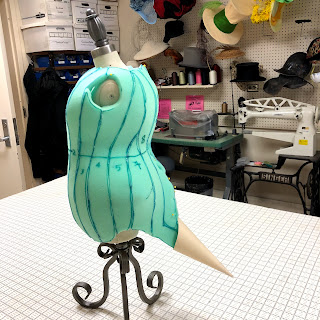 Second-year grad Ellen Cornette created this half-scale pod pattern for a Hornet mascot. The sharp stinger cone can slide on for a football match and slide off to reveal a softer stinger structure for events in which the mascot would be interacting with small children.