A look at the costumes for Everybody at PlayMakers Repertory Company

Everybody is a contemporary reimagining of the medieval morality play, Everyman. We recently opened this show at PlayMakers Repertory Company and the particular challenges of this production provided us with a lot of interesting projects in the costume shop!

The central challenge of the show is that the casting is determined by lottery at the beginning of every show--the entire cast play Somebodies until character of God draws a name for the performer to play Everybody; the rest of the casting is determined by that chance assignment. This means all the actors need to know the whole show, because they won't know who they are playing until the show has already started. This also means the the costumes need to fit several different people!

Luckily, costume designer McKay Coble took that into consideration when she conceived the show, so many of the characters wear easily-switchable items to indicate who they are--Strength wears a helmet on an adjustable hardhat mount, Love wears a cape-like robe, etc. In terms of show assignments for our costume production graduate students, the show wound up essentially 90% craftwork. Since we endeavor to provide our grad students with portfolio-worthy assignments on the professional shows, this did NOT mean that I directed a team of grad student assistants--we all got workloads chosen with each student's strengths in mind--that meant that each of them received an assignment for which they were responsible for all elements--millinery, surface design, draping, whatever the design required. 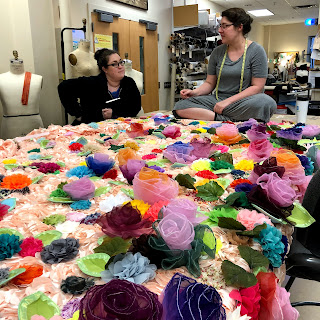 PRC wardrobe supervisor Amy Evans talks with draper Cami Huebert about how best to care for the elaborate floral robe worn by the character of Love, who would always be played by the same performer. This robe has hundreds of handmade fabric flowers sewn on to create a bower/flower garden effect. 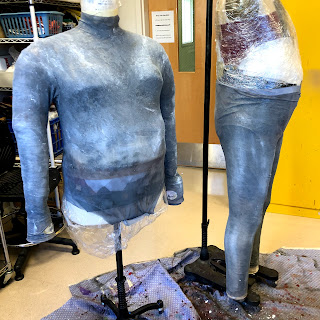 For the character of Death, McKay wanted the actor to look like he was coated with ash.
Here you see the power net leotard and tights made by draper Erin Rodgers and first hand Sherry Wu with the first coat of textile paint applied. They had to pad the forms to replicate the actor's body shape (Death is always played by the same performer). 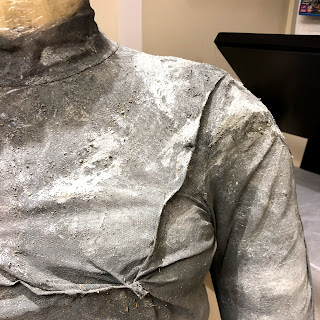 In tech, the bodysuit "grew" as the gritty ash effect inhibited the elasticity of the power net to recover from stretch as much as it otherwise would, so McKay requested that Erin and Sherry use this to advantage in creating these disturbing scarification effects around a sculptured nipple. Definitely an example of "if you can't fix it, feature it!" 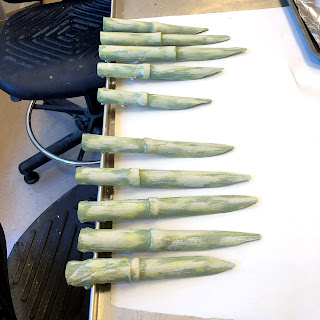 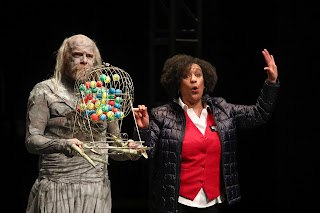 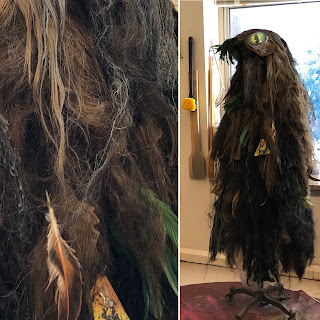 The character of Evil wound up as a collaboration between myself and costume director Triffin Morris. This role is played by two different performers depending on the Everybody assignment, and the character walks on spring stilts with forearm-braced crutches. McKay wanted it to look like a huge hairball in a shower drain--slimy, matted, gross fur/hair/feathers/fungus.

Because the stilt choreography took a while to settle on, and the character concept changed several times, we decided to start with a brown fur costume from our stock. This costume began as a bear-fur coat for an undergraduate production several years ago, then got reworked into last season's Woodchuck in Bewilderness, and is now enjoying its third (and final) life on the stage as Evil. 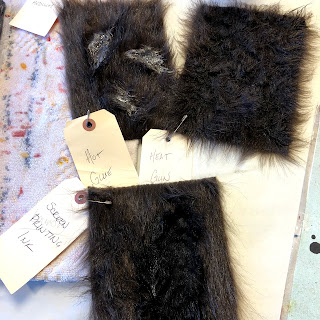 Some slime samples I made for McKay to look at. 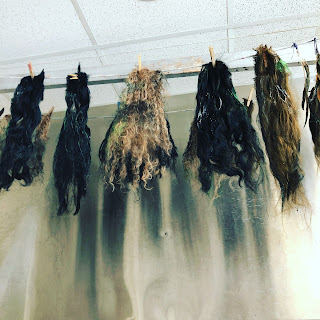 Wardrobe supervisor Amy Evans used this as an excuse to cull our wig stock--these are bits of deaccessioned wigs cut into clumps and "slimed." These were placed all over the fur base costume and stitched into place with the help of our undergraduate shop assistants and Cami Huebert (who captained the flower robe trimming in much the same way). 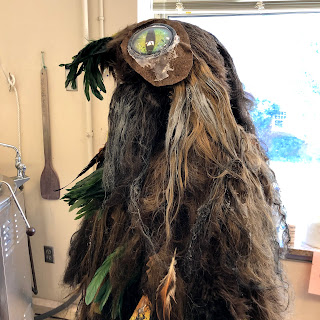 The hood has a large Fosshape "cranium" inside it to keep the shape on the performer's head. The eyes (of which Evil has four) are some pieces of Halloween decor that McKay bought this past fall with this costume in mind. The eye slime is hot glue smeared like sparkle.


I'll end this post here, but there will need to at least be a Part Two, if not more!