I'm thrilled to share this interview with our most recent alumna, Danielle Soldat, who received her MFA in December '19. She's been on staff as a draper at the Paramount Theatre in Aurora, IL for several months, at the same time as she worked to complete the last of her capstone projects.


LB: What are your responsibilities as a draper at the Paramount Theatre?

DS: At the Paramount Theatre my job as the draper is to make sure the workroom is kept busy and all construction and alterations on costumes are completed.  I started this job at an awkward part of the season, so it hasn’t worked out that I have been the sole patternmaker for the previous shows, but from now on I will be the one who creates all the patterns for our builds.  Once patterns are made I am able to hand them off to my first hands and guide them through a construction process.  Before the construction process gets underway I have to communicate with the shop manager about what the shop needs in terms of labor.  Once our overhire stitchers are in I can make sure that the first hands have projects to keep them busy and if they don’t, I need to find projects to keep them occupied.

Once we are able to get the actors in for fittings I am required to be in the fittings to fit each garment and make sure that I have the full picture of how much work the shop has to do.  I work with the Assistant Shop Manager throughout the process to communicate when and who we need to see for fittings.  I also am in communications with the shop manager about upcoming shows and coming up with labor estimates for builds.  While the design process is happening the shop manager can get an idea of how much time it would take the shop to build looks from these estimates.

In some of the downtime we have had in between shows we take that opportunity to do inventory and clean.  One of the big projects I had was deciding on a system and organization for our new stock space.  Collaborating with the entire shop and then being able to assign tasks and create a space that is useful to all was my job.

LB: Could you describe the shop where you work—how many teams, what the positions are, craftspeople/dye shop, etc.?

DS: So the Paramount is still a pretty small shop seeing as the producing theatre is only 9 years old, but in the next few years will hopefully be growing larger.  As of right now the staff that is hired year round consists of only 6 people.  Our management team is our shop manager and assistant shop manager, the assistant is the one who works as the designer's assistant as well as the shop manager's assistant during the shows.

As for the construction team, I am the only draper that is hired on for the season but when it comes to the Christmas show we hire on more drapers to take on the massive build load.  So for Beauty and the Beast we had two overhire drapers (one being Michelle Bentley, another UNC grad, and the other Nancy Brundage Sidman who is a draper at Drury Lane Theatre the rest of the year).  Along with me on the construction team we have two first hands who both are highly skilled and also have pattern making knowledge so when necessary they are able to help on that end of the work as well.  Rounding out our staff we have a craftsperson who has a new crafts shop upstairs.

LB: For readers who aren’t familiar with Paramount, can you describe what the Broadway Series is? Is the theatre affiliated with Paramount Studios?

DS: So the Paramount Theatre is in Aurora, IL which is about an hour outside of Chicago and was originally built to be a theatre for Paramount Pictures to play their latest films in the early 1930s.  It continued showing films until it was renovated in the 1970s and by the 1980s it was considered a historic landmark.  The theatre continues to hold Monday Movie nights where you can see films for only $1 as well as houses traveling acts as well.  It wasn’t until ten years ago when the Paramount started producing their own shows which they named the Broadway series.

The Broadway Series consist of four big musicals that run about eight weeks each.  The Christmas show, which is the largest, will be the exception and run ten weeks.  This is the ninth season that the Broadway Series has been running; it's getting larger and larger every year with one of the largest subscription bases in the country.  So far the four shows in the Broadway Series are the only productions that the Paramount produces but next year they will be opening another series called the Copley series which is named after the theatre it will be held in directly across the street from the Paramount.  The Copley series will be another four shows, three of which will be small plays and the last being a small musical.  This new series will be very different than the grand scale that is the Broadway Series but it will be a more intimate look at the work that happens at the Paramount.

LB: What is your favorite tool or piece of shop equipment?

It may be silly but one of the tools I find to be the most helpful in the shop is the “poofer”, or more accurately named a Hem Marker.  What started off as a ruler with a metal stand and metal slider that you could use to pin up hem has evolved to a plastic ruler with a hose and pump that is reminiscent of a blood pressure cuff mechanism.  This hem marker is known as the poofer because when squeezing the pump it releases a line of chalk that is level with the floor and at the height that you determine with the ruler.  I have used this at nearly every shop I have worked at and loved it, however it wasn’t until working at the Paramount that I have discovered one that is on wheels.  Whether it be that I am lazy or just another way to help my knees and back, the one on wheels is amazing because you can easily guide it around the performer using your foot without having to bend over or get on your knees and crawl around.  Working on a show with a large female ensemble that all have multiple layers of skirts and many different outfits that poofer has definitely saved a lot of time in fittings and strain on my back!

LB: How long have you been working in the costume field and how did you get your start?

DS: I guess I have only been working professionally in the costume field about six or seven years but really costumes have been my life for about double that.  I started doing community theatre being in the shows while helping my mom making the costumes, eventually stealing her job and just doing the costumes myself.  So when I got to high school I immediately joined the costume crew for the theatre and really discovered that this was what I wanted to do for a career.  It seemed the most natural to pursue costumes in college so I went to The University of Western Michigan and graduated with a BFA in Theatre Technology and Design focusing on Costumes.  While I was there I was able to work in the costume shop during the year as well as do summer stock work.  After my junior year there I got a job working at the Glimmerglass Theatre Festival over the summer, which I then proceeded to return to for the next five summers.  After I graduated I continued my education at the University of North Carolina graduating with my MFA in costume production which lead me to making the connections to get me to the Paramount.

LB: Can you tell us about a recent project you worked on, perhaps share a pic?

DS: I have already mentioned a number of times working on the Christmas show, Beauty and the Beast, at the Paramount.  It was the first show here that I was there for the majority of the build and I was thrown right into the chaos.  For that show I was the draper for about twelve different looks as well as a group of seven dancing napkins.  I did four of the looks in Be Our Guest, the human looks for Mrs. Potts and the Wardrobe, and the Enchantress who appears in the beginning and end of the play.  All these pieces I draped and fit but was able to hand off a lot of the cutting and stitching to first hands and stitchers.  The napkins were something that I patterned, put together mockups, fit and cut fashion fabric but we were then able to send them out to have the rest of the construction done.

Along with the builds that were on my list, my two first hands had spent the summer making patterns for all of the villagers, LeFou, Gaston, and the Prince.  So when we started up build in September again, I was helping them keep their projects moving as well as doing all the fitting for those looks as well.  So while the first hands and stitchers were busy building the whole show, in between fittings and helping them I was building the three looks for Belle.  With a cast of 36 and each ensemble member having at least three, but more likely four or five different costumes we were kept very, very busy.

This show was probably the largest and most difficult show I have worked on but it was also the most rewarding.  There was so much collaboration and such a vast amount of skills that were utilized throughout the build, it was actually quite amazing. 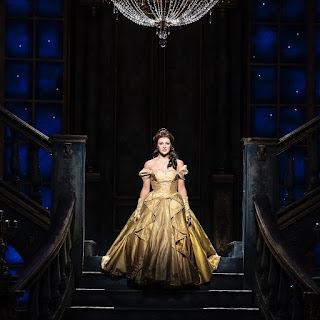