Recall the first post on this topic; I'll reiterate the salient information about the show so that it informs your view on the projects covered in this Part Two post as well.

Everybody is a contemporary reimagining of the medieval morality play, Everyman. We recently opened this show at PlayMakers Repertory Company and the particular challenges of this production provided us with a lot of interesting projects in the costume shop!

The central challenge of the show is that the casting is determined by lottery at the beginning of every show--the entire cast play Somebodies until character of God draws a name for the performer to play Everybody; the rest of the casting is determined by that chance assignment. This means all the actors need to know the whole show, because they won't know who they are playing until the show has already started. This also means the the costumes need to fit several different people!

Luckily, costume designer McKay Coble took that into consideration when she conceived the show, so many of the characters wear easily-switchable items to indicate who they are--Strength wears a helmet on an adjustable hardhat mount, Love wears a cape-like robe, etc. In terms of show assignments for our costume production graduate students, the show wound up essentially 90% craftwork. Since we endeavor to provide our grad students with portfolio-worthy assignments on the professional shows, this did NOT mean that I directed a team of grad student assistants--we all got workloads chosen with each student's strengths in mind--that meant that each of them received an assignment for which they were responsible for all elements--millinery, surface design, draping, whatever the design required.

In the first post, we looked at costumes for the characters of Love, Death, and Evil. Today we'll look at some of the other peripheral characters. 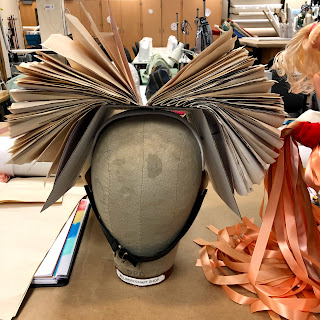 The mockup for the book hat worn by the character "Mind." 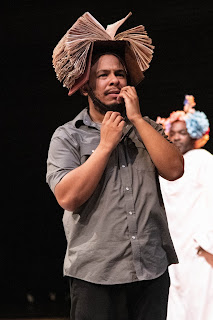 Anthony August was selected to play "Mind" the night stage shots were taken.
At one point, this character makes reference to "losing his mind," and some pages of the book fall out and drift down to stage.
This image by HuthPhoto. 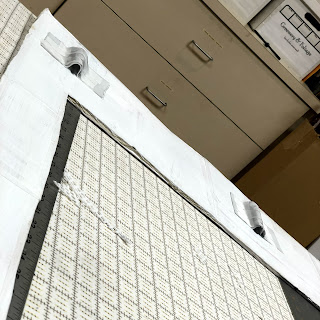 The character of "Cousin" has a huge Polaroid picture frame that travels with them everywhere. This is a shot of the mockup frame with post-holes for the marching drum rig on which the Polaroid frame is mounted. 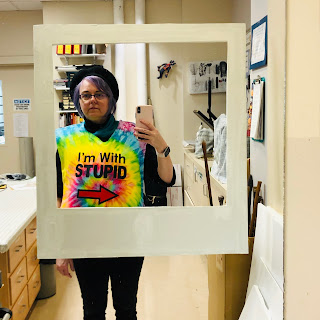 Me modeling the finished "Cousin" rig. The "I'm with STUPID" shirt covers an industrial felt "breastplate" to hide the nuts and bolts of the drum support. 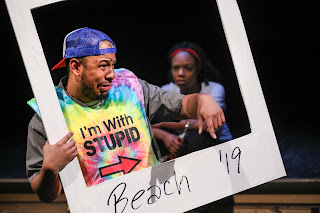 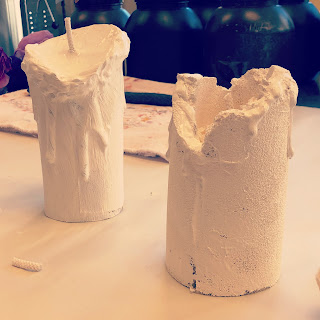 For the character of "Time," the original design was a candle hat.
These are two sample candles I made in order for project captain Jane Reichard to talk with the designer about bringing her concept to life. The one at left is Wonderflex, the one at right is painted urethane foam, both covered in hot glue "drips." McKay liked the one on the left. 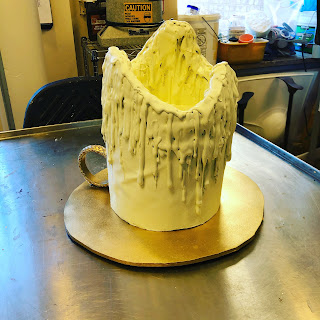 Here's Jane's candle hat before she installed the wick, which had actual light-up embers at the end.
Unfortunately, this candle hat concept was cut during previews, as it was deemed too distracting for the nine-year-old girl who plays "Time." 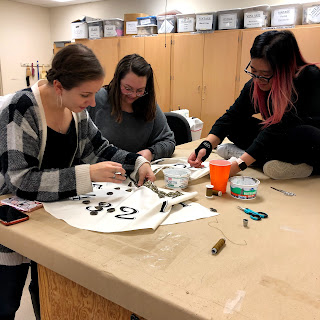 The costume was redesigned on the Thursday before opening, to be a clock-face capelet. Here you see graduate students Jane Reichard, Alex Hagman, and Sherry Wu all stitching cogs and gears onto the garment. 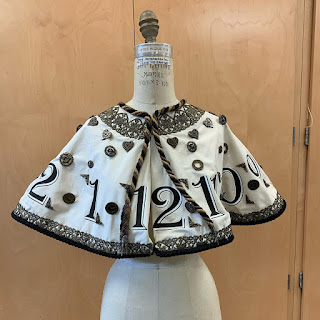 And here's the finished capelet! So cute!

There are enough more projects in this show to warrant a Part Three, coming soon.