Part Three: More of the Everybody costumes!


Recall from the prior two posts (here and here) how unusual our current production of Everybody is at PlayMakers Repertory Company. I thought for this one maybe I would focus on some of the easier-to-reconcile costume designs which depend upon theatrical illusion using a more traditional approach. 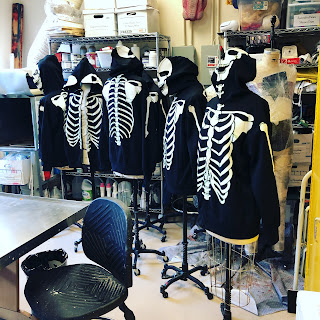 The show includes a five-person dance number called the Danse Macabre. The performers wear these skeleton hoodies which zip up all the way over the wearer's face (a comfy Halloween costume conceptual item bought retail). We added UV-reactive paint to the bones of these as well as skeleton-hand gloves so that they would fluoresce during the number. 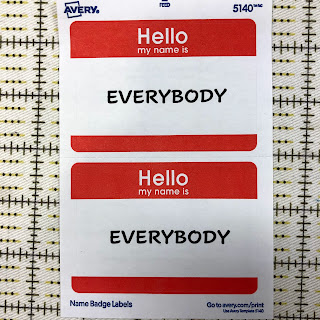 Because of the nature of the show, once the character of Everybody is chosen by lottery, every other performer puts on one of these nametags with their character name on it. We took this image and created a heat transfer so that the Everybody shirts would have the sticker permanently applied when the chosen actor has to change out of their Somebody shirt (grey) into an Everybody shirt (white). 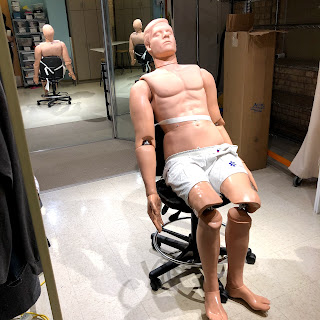 This is Rescue Randy. He's a fire-drill dummy for firefighters to practice rescuing people overcome by smoke. He is fully articulated and weighs 160 lbs. In our show, he serves as a body double for the character of Death, who enters the stage at one point in a particularly scary and dangerous way. We obscure Randy's features with an ominous black hooded robe at that point. 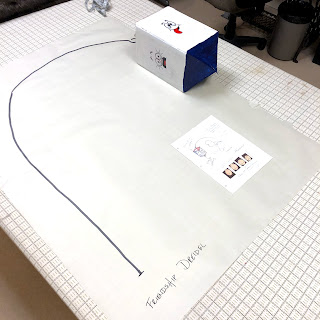 Now let's talk about one of those highly conceptual, unusual costume designs, this time for the character of Friendship. Friendship wears something we've been calling the "emoji dreidel," a spinning box suspended in front of the wearer's face which embodies the face that Friendship shows to the world. So, the dreidel face may indicate happiness while the actor's face has an expression of disgust. In this image, you see the pattern I drafted for our scene shop to bend a strip of steel to support the emoji dreidel, and the rehearsal mockup of same. 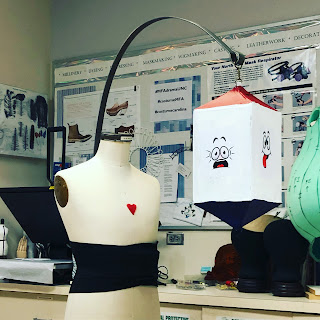 Because the actors who may play this role depending on the assignation of Everybody are very different sizes, each one has a back support brace with a channel for the strip steel arc to slide into. Here we see the piece we sent into rehearsal for the actors to work with. There's a little icon on the base of the shape to indicate which facial emotion is facing outward. 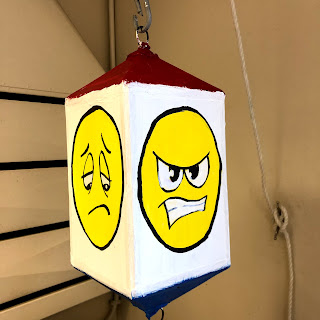 The second iteration of two of the emoji. 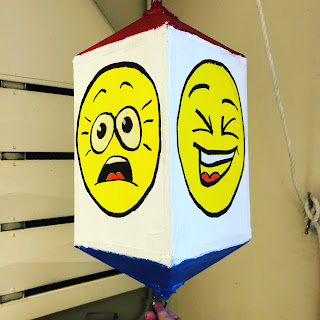 The other two faces of this version. 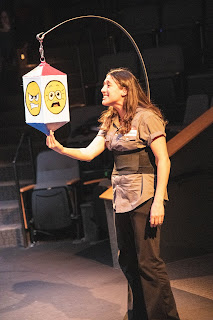 Emily Bosco played "Friendship" the night of stage shots. Here she is with the second iteration of the emoji dreidel. The final version (made by our props department with the help of assistant costume director Jenn Bayang) lights up, but I don't have a photo of that one!

And, believe it or not, I actually have one final post about costuming this show yet to come, probably next week some time.