Part Four: The last of the Everybody costumes!

Recall from the prior three posts (here, here, and here) how bizarre our current production of Everybody is at PlayMakers Repertory Company. This is my final post on the unusual costumes, brilliantly designed by McKay Coble.

This post focuses on some unusual headdresses created by teams led by graduate students. For these, I left it up to the student to decide the methodology by which the piece would be produced and only stepped in to help if they found themselves stumped or swamped; I'd offer media/method ideas in the first case and a skilled pair of hands to help in the second. Take a look at what they made! 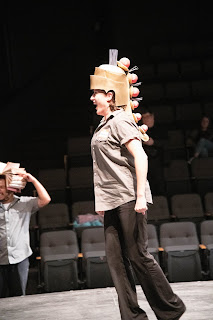 Emily Bosco played the role of Strength for the photo call performance.

Third year grad Jane Reichard made this helmet primarily from 1/4" microcell foam. The helmet also had to fit another performer with a much larger head than Ms. Bosco, so there is an adjustable hard-hat support ring that snaps out of it if the performer with the larger head is cast. (Jane made it to fit the largest head measurement.) 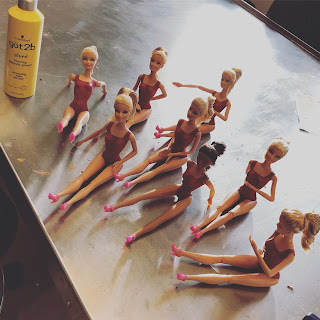 Barbies getting their hair styled. 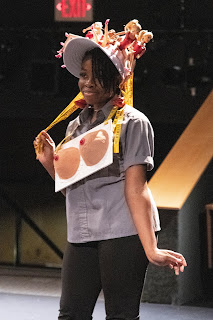 Omolade Wey as the character of Beauty

The team led by second year grad Ellen Cornette was responsible for the character of Beauty (in addition to the book hat they made for Mind in an earlier post). The design consisted of breasts on a placard around the neck and an elaborate headdress covered in swimsuit Barbies and a ponytail made of measuring tapes. The base visor had an elasticated piece at center back so that it would fit the heads of every actor likely to play the role. Ellen delegated the majority of the work on this piece to her assistant, first year Alex Hagman. 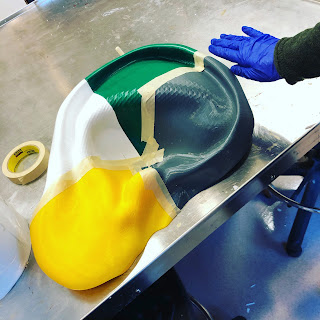 3D print of an 18" ear to be used as a matrix for sculpting.
Gloved hand for scale at right.

Jane Reichard also strategized how to create the costume pieces for the character of Senses, who wears a hat decorated with--among other things--a giant ear. Jane used a 3D scan of an actual human ear, scaled it up, and 3D printed the shape so that we could mold media on it. The ear had to be divided and print in quadrants in order to fit on the bed of the available printers at our campus makerspace. She then glued the four pieces together to create the mold seen above.

First, Jane used the ear as a block to mold buckram over and treated the ear like a piece of millinery. In tech/previews, the creative team decided that they wanted something more realistic and less stylized, and because Jane was also working on an articulated hand puppet, the Time candle hats, and the Strength helmet. I stepped in to create a new ear. 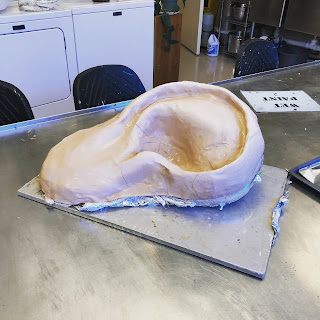 I used the same 3D printed block as a matrix to sculpt a realistic looking ear from Terraflex/Worbla thermoplastic. Jane then painted some highlights/lowlights into it to create the piece you see above, still on the block. 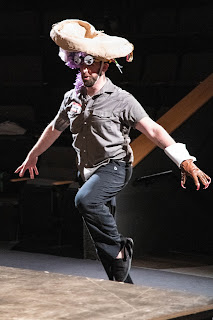 Here's Dan Toot as Senses.
See that freaky clawed glove he has on? That is what replaced the articulated 3D printed hand Jane made when the creative team decided to reconceptualize the nature of that piece.

I think that's a look at everything we worked on in the show? I'm sure if I missed something, one of the students or PR folks will let me know. But I believe this concludes my survey of the costume construction on Everybody.

Of course, we've already started the next show, Julius Caesar...